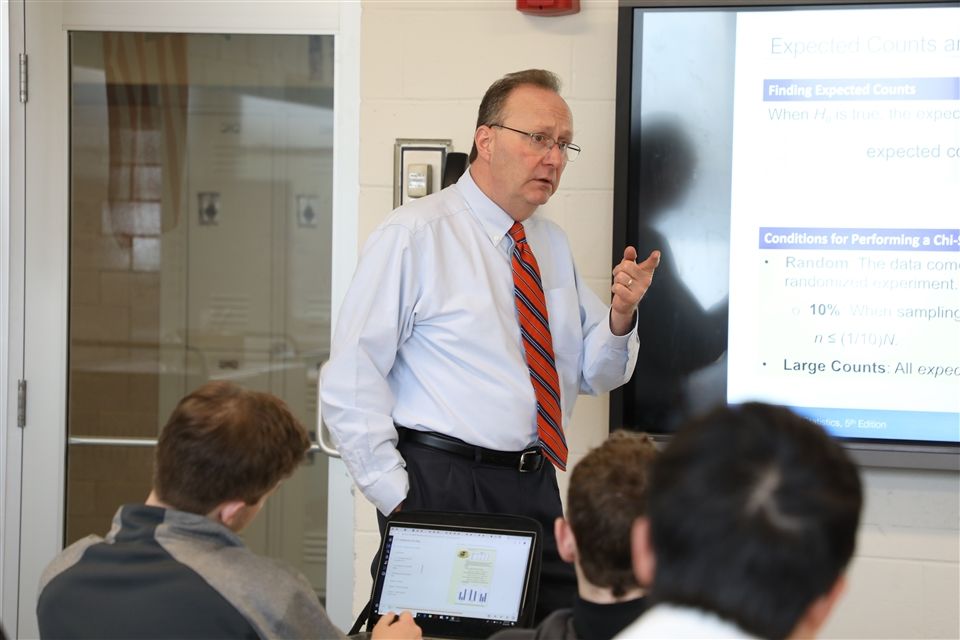 5/5/2020
For a second consecutive year, a faculty member from CM received the prestigious award.
West Roxbury, Mass.— For a second consecutive year, a faculty member from Catholic Memorial School received the Excellence in Education Award from the Archdiocese of Boston.
The Archdiocese of Boston named Mr. John Aversa, the Vice Principal of Technology at CM, one of its 10 recipients of its 2019-2020 Excellence in Education Award during a special web call with Cardinal Sean O'Malley in April, according to an announcement from the Archdiocese’s Catholic Schools Office.
“This annual award honors elementary and secondary school teachers' commitment to developing saints and scholars in the Catholic schools in the Archdiocese of Boston,” according to the announcement.
Archdiocese Superintendent Thomas Carroll said in the announcement that parents, administrations, students, and peers nominate the 10 recipients for, “their strong leadership qualities, Catholic values, academic excellence, and their commitment to their students as well as schools.”

Mr. Aversa, a Medfield resident, said that winning the same award as Mr. Bradley gave him an immense sense of pride.
"I was stunned to be a recipient, but I am incredibly honored and proud to have won the award, in particular because [Vincent] Bradley won it last year," Mr. Aversa added.

"To be considered in the same category of educator as Vin is the highest praise I could receive. He is a remarkable educator and tremendous colleague."
Mr. Aversa teaches AP Statistics at CM and serves as the school’s Math and Computer Science Chair. He also oversees the CM Scholars Program, which he founded in 2016.

"I think there are two attributes that define me best as a teacher," said Mr. Aversa.

"First, I never met an academic subject that didn’t completely fascinate me. Math, science, literature, history, economics, art, music, language;  I love them all. Second, I love getting deep inside something that can be really hard for students to understand and breaking it apart and explaining it in a way they can grasp."

CM uses the CM Scholars Program to offer its strongest students the opportunity to grow intellectually and expand their academic horizons in ways not typically available to students until college.
Mr. Aversa modeled the program after an Honors Program course he took as an undergraduate at Boston College called “Modern Man.”
A CM graduate of the Class of 1978, Mr. Aversa graduated Summa Cum Laude from BC’s Arts and Sciences Honors Program in 1984. He said the "Modern Man" course he took in the Honors Program integrated the school’s English, Theology, Philosophy, and Sociology requirements into a single four-semester seminar.
The CM Scholars Program, Mr. Aversa hoped, would bring that same multi-disciplinary nature from the "Modern Man" class back to his alma mater, while also affording students room for academic specialization.

"Getting [students] to see the elegance in mathematics and to wrestle with the essential and challenging questions of our humanity in Scholars are the most rewarding experiences ever for me," Mr. Aversa said.
Since it began four years ago, the Scholars Program has flourished into a significant part of the CM academic curriculum.

Fellow faculty members have praised Mr. Aversa for his innovative spirit and his willingness to collaborate, which they say has helped lead to public events at CM featuring university professors and best-selling authors.
“John Aversa singularly focuses on enhancing the academic experience of our students and families and inculcating skills, passions, and interests that will last a lifetime,” said Mr. Bradley.
“I know that many number of students, once in college, really appreciate the lessons in discipline, rigor and creativity that Mr. Aversa teaches on a daily basis.”
Mr. Aversa and the nine other recipients of the award will each receive a $1,500 reward and a special invitation to a luncheon in September hosted by the Cardinal and the Archdiocese Superintendent.