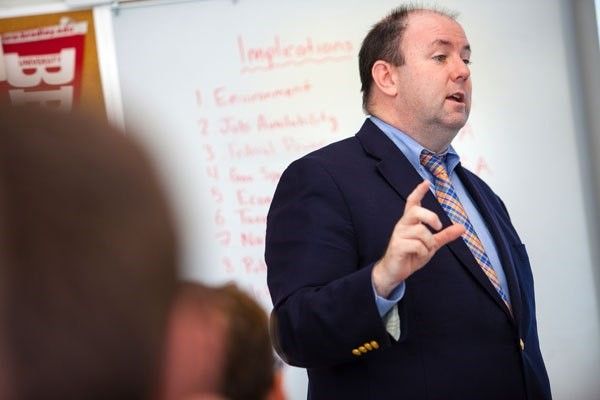 An Andover resident, Mr. Bradley joined nine other recipients selected from a pool of 120 applicants for the prestigious award according to a statement released by the Archdiocese’s Catholic Schools Office.
“This award honors elementary and secondary school teachers’ commitment to developing saints and scholars in the Catholic schools in the Archdiocese of Boston,” read a statement from the Archdiocese’s Catholic Schools Office.
“These teachers have demonstrated their strong leadership qualities, model a faith-filled life, promote academic excellence and are committed to their students and school. Every day, they inspire students from all backgrounds and abilities to learn and they actively collaborate with their peers, students, and families to create a welcoming environment and culture of success.”
At CM, Mr. Bradley teaches AP US History and serves as a moderator for the school’s Model UN program. He spent several years serving as an AP US History Reader for the national exam. Aware of Mr. Bradley’s expertise in teaching AP US History, The College Board selected him as a featured speaker on AP curriculum and pedagogy at its 2006, 2010, 2015, and 2017 AP National Conferences.
Mr. Bradley’s love for history falls in sync with his forward-thinking, active teaching approach. Last year, he led an independent study of eight seniors that collaborated with officials at the Edward M. Kennedy (EMK) Institute for the US Senate in Boston, making CM the first school in the country to collaborate with the EMK Institute to create a Senate Immersion Module.
“The impact that he has on his students both inside and outside the classroom is profound,” said CM principal Mr. Thomas Beatty, who has worked with Mr. Bradley as a fellow teacher and department chair over the past 17 years.
“I’ve had the opportunity to observe Mr. Bradley’s capabilities and passions in the field of education from a wide variety of perspectives. And, every day, I am consistently amazed at how he teaches, how he leads, and how he inspires the extensive range of students and teachers under his purview."
According to the Archdiocese’s Catholic Schools Office website, each award recipient receives a $1,500 reward and a special invitation to a luncheon hosted by Cardinal Sean O’Malley and Archdiocese Superintendents Ms. Kathy Mears and Thomas Carroll.

The luncheon will occur in May.