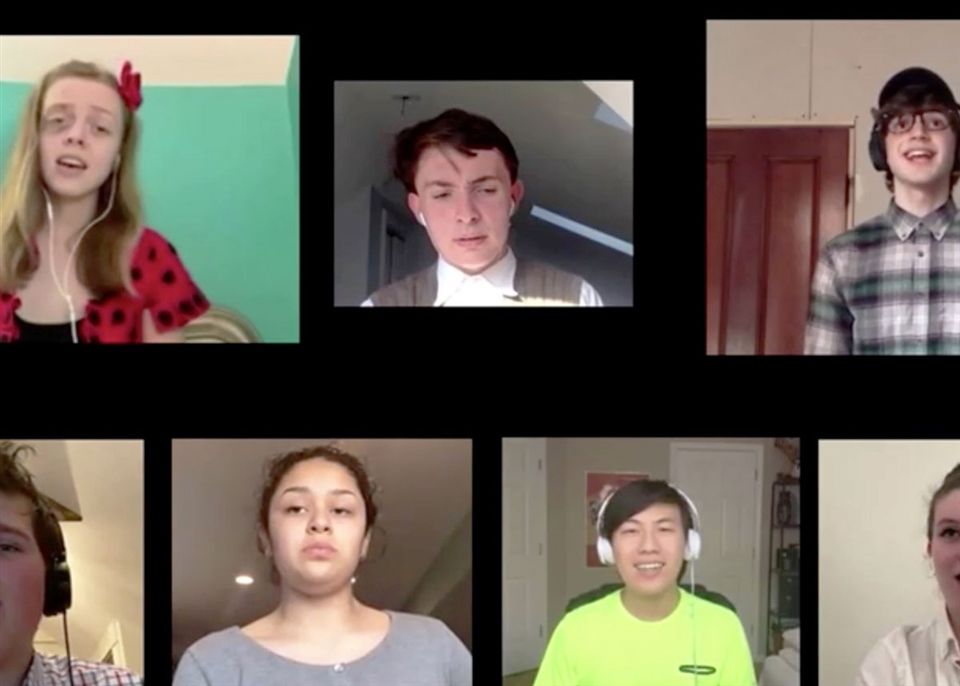 The Show Must Go On!

11/12/2020
Maggie Chipman, Communications Fellow
Learn how, despite a global pandemic, the CM Theater Program safely casted a remote recording of its spring show "Little Shop of Horrors."
CM Theater's fall performance of "45 Plays for 45 Presidents" aired live to the community on Friday, Nov. 20 and Saturday, Nov. 21.
March 27 was the day of the show. Costumes were sewn, scripts and lyrics were memorized, and props— including a larger-than-life-sized, man-eating Venus Flytrap puppet from Boston Potluck Theatre— sat behind the curtain in the Ronald Perry Gymnasium, ready to take the stage.

But March 12 came first. Two weeks before the Catholic Memorial Theater Program’s debut performance of “Little Shop of Horrors,” the coronavirus pandemic cancelled classes, shuttered school doors, and closed the curtain before it could open. Singing and close dancing, once a relief from the turmoil of everyday life, now threatened health and safety.

Most believed that this would not last longer than two weeks, and a summer show was proposed. As the return to the stage got further and further postponed, the cast needed a new solution, and was determined to find it. This was unprecedented, but not impossible.

“We were so close, so it was never really a thought of cancelling,” said Dr. Mickey Corso, the director of “Little Shop."

"Kids had learned all their songs, choreography; there was just too much work that had already been put into it.”

Everyone agreed: The show must go on. But how?

Students were spread across the state. Gatherings — such as audiences — were banned for the foreseeable future. Virtual programming was the only option, but that held its own challenges of audio syncing and video editing. But Dr. Mickey Corso and Dr. Michael Monroe, the show’s director and musical director, believed in their cast’s commitment to the show.

“Little Shop of Horrors,” the spring musical at CM, follows the journey of Seymour (James O’Donovan ’20), a hapless floral shop employee; his crush Audrey (Abigail Beard, a then-senior at Natick High School), and a fast-growing, blood-sucking plant (voice: Kyle Peterson ‘20; puppeteer: John Marcucci '22) with a secret desire for world conquest. The show explores poverty, fame, and risk through the eyes of Seymour, who will do almost anything for love and attention.

The show also involves closely blocked scenes, belted solos, and expressive monologues — all of which stood antithetical to Massachusetts’ guidelines, even as the state began a gradual reopening process throughout the spring and summer.

Instead of stepping onto the stage in CM’s Perry Gymnasium, Mr. Will Healy, a Campus Minister at CM, pops onto a screen, announcing, “On the 21st day of the month of September, in an early year of a decade not too long before our own, the human race suddenly encountered a deadly threat to its very existence. And this terrifying enemy surfaced as such enemies often do: in the seemingly most innocent and unlikely of places.”

The narration fades, and the titular theme begins, sung in harmony from the bedrooms of the cast. Each performer had sung along to a sync track, recorded themself on their phones, and sent the best version to Drs. Corso and Monroe. The duo stepped up to edit the show, spending endless hours stitching together dozens of clips. Of the whole set, the musical numbers proved most time-consuming.

“Whereas a standard rehearsal of an ensemble number could feature everyone singing at once, students had to record individual parts along with sync tracks so that they could be assembled,” Dr. Monroe said. “In some cases, taking into account various digitally created instrumental parts, this could add up to more than a dozen tracks that needed to be mixed and synced.”

This was no small feat; “Little Shop” has 20 musical numbers entwined into the show. The acted scenes, recorded live over Zoom, don’t require the same precise audial timing, but come with their own challenges, like executing intentional blocking so that conversational angles between actors would look natural. Dr. Corso held Zoom rehearsals for months between May and July, and the students not only practiced their craft, but achieved some much-needed reunion and socialization.

Over the course of Act I, Seymour names the plant “Audrey II” after his love interest, and it begins to grow with the help of human blood and flesh. Musical numbers like “Grow for Me,” “Feed Me (Git It),” and “Act I Finale” underscore the plant’s growth. Behind the scenes, growing flora requires four different puppets, each one larger than the last, to bring Audrey II to its final man-eating size. Multiple characters fall to this green enemy, eaten by the plant. In order to film these puppet scenes, the cast needed to return to Baker Street.

After temperature checks, masks, parental permission, and proper safety protocol establishment, a few cast members returned to the gymnasium to film. Most notably, perhaps, is a song-and-dance number, “Mushnik and Son”, performed by O’Donovan and Healey ‘22 (Mr. Mushnik) atop the CM seal, with the Audrey II plant looming in the background.

Nothing about the performance was conventional, including the six-month rehearsal process. Most high school shows rehearse in the same space for eight or nine weeks before performing. The cast of “Little Shop” endured a change of venue, a half-year rehearsal schedule, and an isolated recording process.

Once the show was stitched together, the Catholic Memorial Theater Program invited friends, family, and fans to a Zoom viewing. Dr. Corso was confident that the show’s caliber would be a pleasant surprise.

“I think when you invite someone to a Zoom version of high school musical, people attend as a show of support and perhaps with modest expectations,” Dr. Corso said. “My sense is we exceeded those expectations and that those who saw it were genuinely entertained.”

Dr. Corso credits the students with this successful show; the entertainment quality came from within.

“More than anything it was the efforts of the cast, in particular the seniors—James O’Donovan, Kyle Peterson, Peter Xiao, and Abigail Beard—that motivated us to keep the show moving toward some form of performance,” he said.

“Led by these seniors, the entire cast was willing to trust a process none of them had ever been a part of before.”

While all involved are deeply proud of the product, the CM community still yearns for live theater.

“Although this was a really special and unforgettable experience, that was partly because it was so unusual and it involved rescuing something— a show! — that had seemed to be lost,” Dr. Monroe admits.

The hope is that CM theater can continue to thrive, even as the pandemic continues. A hybrid of the two techniques, the fall play 45 Plays for 45 Presidents will be livestreamed on November 20 and 21. The cast will be masked and distanced, performing from CM’s brand-new Performance Studio.

Dr. Corso echoes, “I love live theater. There is something about an audience being in the same physical space as the performers, the way emotion is palpable in the room, and the way performers and audience play off each other that is powerful.”