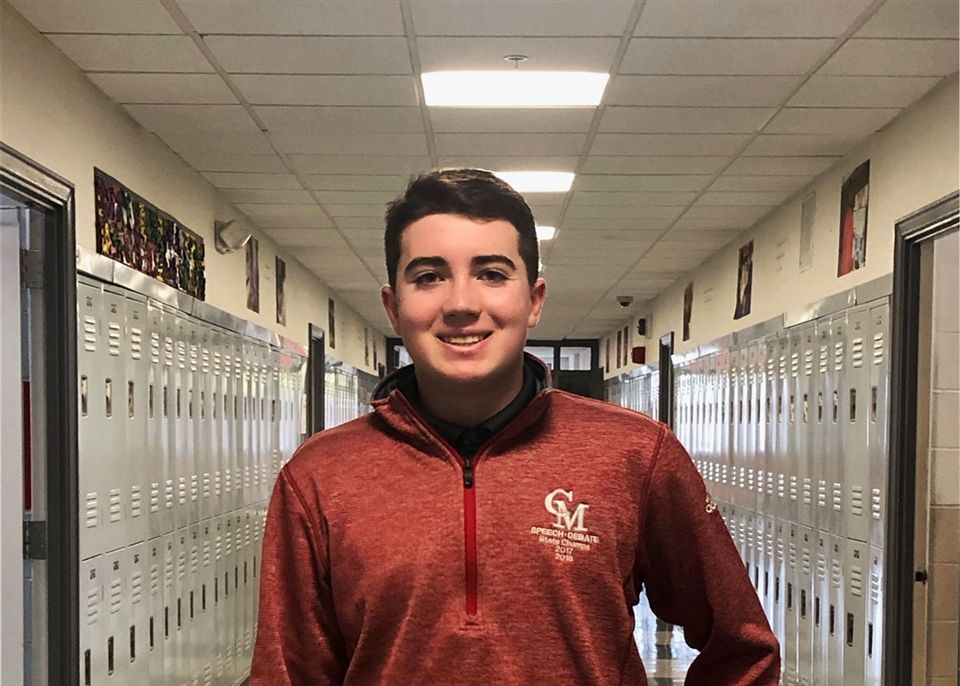 "To me, the Letter of Commendation is a testament to all the hard work I've put in over the years, and it showcases my studiousness and diligence as a student,” said Patrick.

“My teachers at CM really care about giving me the best education possible, and I have gained so much confidence in my abilities because of their dedication."

While Patrick takes pride in his own academic prowess, he excels outside the classroom too. He runs on the varsity cross country team, participates in the peer ministry program, and competes on the nationally ranked CM Speech and Debate Team, which has won three of the past four State Championships.

As a sophomore in 2018, Patrick won first place at the CM Scholars Colloquium for his independent study on the improbability of extraterrestrial life. He competed against fellow sophomores and juniors who had created research projects as a part of CM’s Scholars Program.

“If I could choose one aspect of my CM education that has had the greatest impact on my intellectual curiosity, it would be my involvement in the CM Scholars,” Patrick said.

“Through this program, I have learned about so many topics that I would never have explored on my own. The critical thinking skills I have learned make me feel prepared for the seminar style classes I will encounter in college.”

Patrick’s national distinction continues a tradition of academic excellence at CM. In 2019, the NMSC commended then-CM-senior Ben Chipman, of Norfolk, for his score on the National Merit Qualifying Exam. He now attends Duke University.

“Those being named Commended Students have demonstrated outstanding potential for academic success,” a spokesman for the NMSC wrote in a press release to CM Principal Mr. Andrew O’Brien.

“These students represent a valuable national resource; recognizing their accomplishments, as well as the key role their schools play in their academic development, is vital to the advancement of educational excellence in our nation. We hope that that this recognition will help broaden their educational opportunities and encourage them as they continue their pursuit of academic success.”

The 34,000 Commended Students no longer compete for National Merit Scholarships. That distinction belongs to the 16,000 semifinalists who qualify as the highest scoring candidates in their states.

“While Patrick has continuously set the bar high in the classroom, I’m even prouder of the young man he’s continued to grow into every day here at CM,” said Mr. O’Brien.

“His commitment to character, authentic intellectual curiosity, and desire for knowledge for its own sake are true measures of his incredibly bright future.”