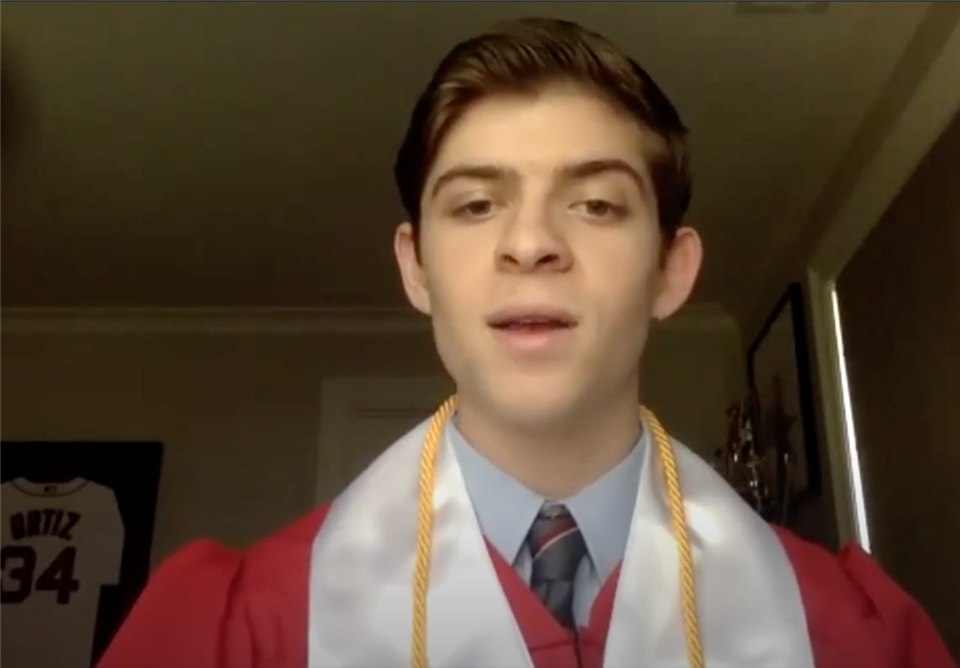 6/4/2020
The Class of 2020 gathered online one last time for a conferral of diplomas, award ceremony, and a graduation Mass.
West Roxbury, Mass.— On the Thursday before Memorial Day Weekend, the Catholic Memorial School Class of 2020 gathered for a final time to celebrate their Graduation Mass and Ceremony online and - later that day - for a drive-by parade through campus with faculty and staff.

CM Principal Mr. Andrew O’Brien oversaw the virtual graduation ceremony on Zoom. The ceremony included the presentation of senior awards, the conferral of diplomas, and a special video tribute to the Class of 2020, all of which followed a virtual morning Mass celebrated by Fr. Wayne Belschner, Pastor of St Mary’s of the Assumption Parish in Dedham.
“While this is not a normal celebration per se, I find it fitting that we gather today as an entire community to celebrate this remarkable achievement for a truly remarkable group of young men,” said Mr. O'Brien.

Before the presentation of the senior awards, Mr. O’Brien took time to pause and applaud the entire senior class.
Many seniors, he said, had earned acceptance to schools ranked atop the U.S. News & World Report’s list of top colleges. Those schools included prestigious institutions such as Bowdoin, Northwestern, Boston College, College of the Holy Cross, and New York University.
Above all else, Mr. O’Brien said the class forever distinguished itself by how it responded to adversity this spring. He said that each senior’s commitment to the CM community, especially during the school’s transition to online learning, proved extraordinary.
“As a group, we know that, regardless of the next steps in their journeys, they’re poised to make an impact in whatever community they join,” said Mr. O’Brien.
“These young men have embraced the charism of Brother Edmund Rice and Catholic Memorial, and are prepared to pursue excellence, embrace Gospel values, and lead through service.”

During the award ceremony, Mr. O’Brien and CM President Dr. Peter Folan presented the school’s two highest academic honors, the Joseph G. McKenna General Excellence Award and the Thomas P. Beatty ’68 General Excellence Award.
Reid Gutz, a Wellesley resident who will attend Northwestern, received the Joseph G. McKenna General Excellence Award for finishing first in his class. Meanwhile, Devon Smith, a Hyde Park resident who will attend UMass Amherst, received the Thomas P. Beatty ’68 General Excellence Award as the salutatorian.
The award ceremony ended in the presentation of the Blessed Edmund Rice Founder’s Award to Rory Redmond, a Wellesley resident who will attend Boston College. The award honors a senior who best exemplifies the full meaning of a CM education through their pursuit of excellence, embrace of Gospel values, and leadership through service.
After the award ceremony, Dr. Folan took time to address the senior class. He acknowledged the unusual circumstances surrounding the celebration and reminded them of their responsibility to live out CM’s mission to its fullest as alumni.
“As you grow older, please remember to be great fathers and husbands and partners and brothers and uncles and friends,” he said.
“Our world now needs more men like you. Always stand against injustice, hatred, greed, and despair. Stand with truth and compassion. By being impatient and stubborn optimist and ordering your life around the right virtues, you can change the world and live a life that you will be proud of.
Then, upon conferring diplomas to the entire senior class, Dr. Folan offered some parting words to the seniors and their families before inviting them to campus for the drive-by parade.
“As we leave this gathering, go forth today and forever strive to conquer evil by doing good,” Dr. Folan said.
“Remember to hold your shields up for those who need shelter and care. Though it won’t always be easy, you can shoulder this burden and you’ll be better for it.”
Please see below for our full list of senior award recipients: