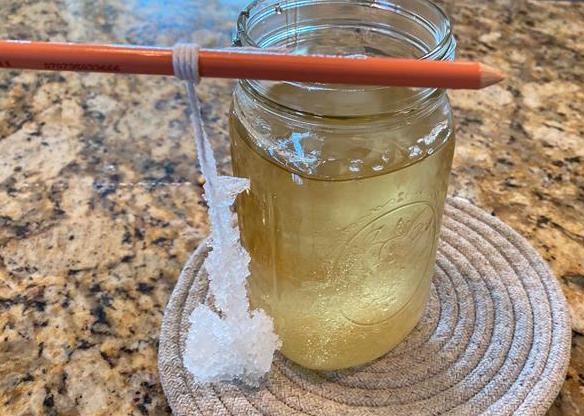 5/1/2020
Mike Kotsopoulos
Rock candy, National Geographic webinars, and a theology class turned into a cooking show: Learn how the online learning curriculum at CM stayed true to its hands-on, active approach thanks to its innovative faculty.
West Roxbury, Mass.— Brendan Galvin re-read the instructions on his computer screen.

The instructions, which resembled more of a recipe than a science lab, asked him to mix three basic ingredients - sugar, water, and a line of string - and let the solution cool for a few hours.
In his previous two attempts, he had expected to find the string covered in miniature rock candy crystals. But each time he checked the string, Brendan found it uncovered.
“Besides not letting it sit long enough or not making the water hot enough, there were no other variables left to change except for the fabric of the string,” said Brendan, a sophomore from West Roxbury.
So, after consulting a few of his classmates via Zoom, Brendan turned his attention to the string. Within a few days of switching the string’s fabric to cotton, he saw the tiny crystals appear up-and-down the string on the experiment’s final go-around.

Watch another at-home chemistry project below:

In the days leading up to April vacation, Ms. Michelle Wynn had asked Brendan and his Honors Chemistry classmates at Catholic Memorial School to create their own rock candy using the instructions she provided.
She hoped the experiment would reinforce their understanding of supersaturated solutions, she said. However, much like the other innovative, hands-on assignments incorporated by faculty during online learning at CM, the experiment served an even higher purpose — it provided a sense of normalcy for CM students amid the COVID-19 pandemic.
“[Ms. Wynn] has done a really good job of keeping us involved at home over [Microsoft] Teams during the pandemic,” said Brendan.
“I‘ve been able to do all the experiments we’ve done with basic materials from my home. I haven’t had to go out and get anything at all.”
Mr. Brian Palm, the Assistant Head of School at CM, believes the professional training provided at CM over the past four years has prepared the faculty to transition its hands-on, active learning assignments on to the web.
In fact, he said the training has inspired creativity and risk-taking in the online learning environment, one that keeps students engaged on an everyday basis.
“The developments in our teaching pedagogy have been focused around the idea that content needs to connect to the boys lives and that learning happens most readily when topics are presented in ways that are relatable and associated with prior experiences or already practiced material,” said Mr. Palm.
“As a result of this emphasis, the teaching and learning culture at CM had already shifted away from content and presentation heavy, teacher-centered learning.”
Prior to her rock candy experiment, Ms. Wynn used a series of experiments dubbed “kitchen chemistry” to initially engage her chemistry students. The experiments required each student to research an experiment of their choice, study the phenomenon that occurred, video record themselves conducting the experiment, and upload the video to YouTube.
According to Ms. Wynn, every mistake proved an invaluable opportunity for growth.
“Failure is a part of learning,” said Ms. Wynn.
“If an experiment doesn’t go well, then we’ll discuss what went wrong on Teams and ask each other how we can make it better.”
The videos submitted by her students ranged from sealing two glasses together using air pressure, atmospheric pressure, and a candle, to dissolving the shell of an egg using soda.
Some students believe the online learning assignments allowed them to better appreciate how the theories and concepts they learn in science class connect with their everyday life.
“[The experiments] have really taught me how chemistry is all around us,” said Brendan.

“I never realized how much I already had at home.”
Faculty members outside the Science Department have followed a similar approach in their own online learning pedagogy.
Theology Department Chair Dr. Mickey Corso normally teaches his juniors how to bake unleavened bread in the Kennedy Commons. However, due to the shift to online learning in early March, he provided his students with instructions on how to bake the bread from their kitchens at home using Microsoft Teams.
The baking exercise, he said, proves an important – and tasty – lesson on Passover, the Eucharist, and the Last Supper, especially in the weeks leading up to the Easter season.
“[It was] part theology, part bad cooking channel show,” he said.
“I think my students were engaged and had fun the entire time.”

Of course, collaboration between faculty members has also helped bring new and exciting activities into their online classrooms.
In March, a suggestion from Science Department Chair and Certified National Geographic Educator Mr. Brian Mulcahey provided Mr. Gabriel Verdaguer and his AP Spanish students with the opportunity to participate in a National Geographic webinar in Mexico City.
The webinar, hosted in Spanish by National Geographic Marine Biologist, Mr. Catalina Velasco, allowed students to learn about the effects of Global Warming on different regions of Mexico.
Mr. Mulcahey provided his own middle school Critical Making course with a similar opportunity earlier in March. Within the first week of online learning, his critical making students attended a National Geographic webinar with Mr. Paul Salopek.
Mr. Salopek, a National Geographic fellow, explained to the class how he travelled on foot from Kenya to Myanmar seven years ago. Mr. Mulcahey then asked the class to design a hat or cup with materials available at home that could have helped Mr. Salopek during his journey through its extreme terrain.
“Breaking into separate Zoom classrooms, the students could then share their designs with one another,” said Mr. Mulcahey.
“This allowed [my students] to practice giving each other constructive feedback so that they could improve their design on their next try.”

The collaborative spirit displayed at the middle school level inspires the faculty to continue to raise the digital bar higher for their students every day, according to numerous faculty members.
“We think about the resources - different as they may be - and we think about how we can leverage those to make the learning come alive in the same ways we would hope that would be happening in face-to-face classrooms,” said Mr. Palm.
“Instead of seeing this new environment as limiting, I believe that many of our faculty are considering the opportunities and potential in this ecosystem."
Now, with less than six weeks left in the school year, the faculty hopes this online learning environment provides their students with a clear path toward success.
Building that moment, they believe, will make all the difference in preparing their students for the next grade level.