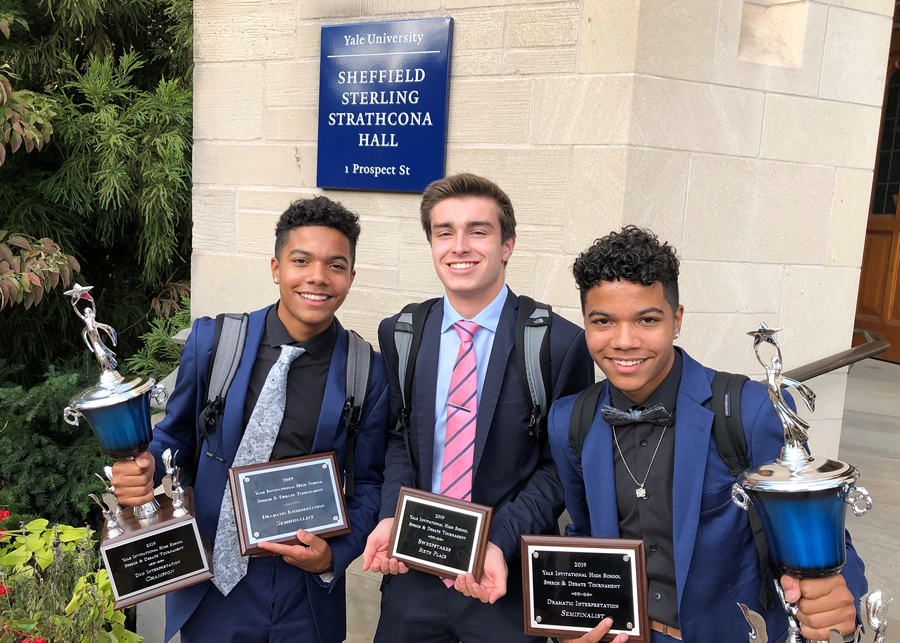 Thanks to the first-place finishes of both Gadsden brothers, the CM speech and debate team placed sixth overall out of over 200 schools competing in the competition. Last year, the team finished seventh, its first top-10 finish at the invitational in the history of CM’s program.
“Obviously we went into the tournament wanting to win, but not expecting to,” said Marcus, one of the team’s three co-captains.

“There were over 200 schools there, so the chance of excelling was slim to none. So, when we heard the results, I was shocked at first, but then felt extremely grateful, knowing that all the hard work paid off, and I could experience this with my best friend.”

Every year, teams from all over the country compete in the NSDA’s prestigious Yale Invitational. Marcus and Darius, a pair of twins from Randolph, began preparing for the competition after they both competed in the NSDA’s National Tournament in Dallas this past June.

“We started looking for pieces and memorizing as soon as we could,” said Marcus, who also serves as a peer minister at CM.

“We dedicated our summer to becoming familiar with the script and connecting with our characters. Through hard work and persistence, we felt confident that we would show up for the first tournament of the year at Yale.”

The two brothers received strong support from fellow senior co-captain Rory Redmond. Rory, a Wellesley resident, and Darius both finished in the top-10 in the competition’s Dramatic Interpretation category.

Brother Cavet, the team’s head coach, praised the leadership and work ethic of his three captains when the team returned from New Haven. He believes that the captains set the right example for their fellow teammates and referred to CM’s placement as, “an overall team win.”

“If there was any doubt about whether practice makes perfect, our tri-captains have put an end to that discussion,” he said.

The strong finish to the team’s first competition sets the bar high on expectations for the rest of the season. Last year, the team finished second in the state after winning back-to-back State Championships in 2017 and 2018.

“It’s a great start to the season,” said Rory.

“But we’re always looking ahead to the next competition.”