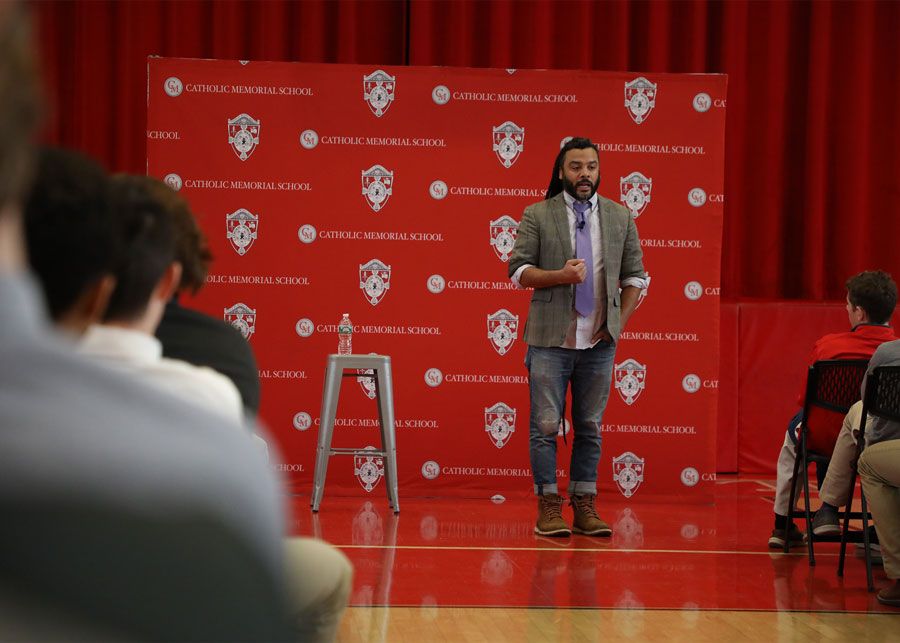 1/23/2019
Mr. Adam Foss, the former Suffolk County Assistant District Attorney, spoke to eleventh and twelfth grade students about the correlation between race and mass incarceration in America when he visited Catholic Memorial School last Thursday.
West Roxbury, Mass.— Mr. Adam Foss believes he’s flown over a million first class miles in the past three years. However, until two months ago, he never sat next to two black strangers.
When Mr. Foss, the former Suffolk County Assistant District Attorney, explained this to the eleventh and twelfth grade Catholic Memorial School students at his guest lecture in the Ronald S. Perry Gymnasium last Friday, he expected plenty of discomfort among audience members unaware of the current correlation between race and mass incarceration in America today.
“The best piece of legal education that I’ve ever gotten didn't come from a $150,000 piece of paper that now sits on my wall,” said Mr. Foss, a criminal prosecutor who graduated Cum Laude from Suffolk University Law School.
“It came from one of your peers. A 16-year-old kid sitting in handcuffs and ankle shackles reading at a fifth-grade level in a courthouse. I came here today not to give you a rousing speech but because I’ve learned the most I’ve ever had from people just like you.”
Mr. Foss, known for his Nantucket Project and TED talks, illustrated the current mass incarceration crisis with plenty of sobering facts about the American penal system. American prisons and jails house over 2.2 million people while another 5 million live on probation or parole, according to Mr. Foss. He further explained that one in three black men born today face the likelihood of serving time in jail or prison.
After asking adolescents from poor socio-economic means why they committed crimes, Mr. Foss began to notice the deep-rooted flaws in the Amercian justice system. Most of these children, he believed, committed drug and gun crimes out of desperation. He knew that he needed to protect these kids from the pitfalls of drug and gun crimes, empowering these kids to fix their own circumstance through education and mentorship.
“We’re undergoing the greatest human and civil rights crisis of our time,” said Mr. Foss to the packed gymnasium.
“As adults, we’re handing you this legacy. This legacy of mass incarceration."
Instead of locking away these adolescents for petty crimes, Mr. Foss proposes that the justice system work with them to reconcile, and restore, their wrongdoings.
The talk ended with a question-and-answer session among CM students. A diverse crowd of students engaged with Mr. Foss and asked how to better combat, and understand, the issue at hand.
Mr. Foss appeared to leave campus quite impressed.

"In the criminal justice system, we spend a bunch of time litigating whether someone is guilty or not that, by the time that happens, we've lost the ability to get the victims stuff back," he said.
“The good news, and there is good news, is that when I come to a room like this, I don’t see a bunch of eleventh and twelfth graders, I see the new civil rights leaders of our time."