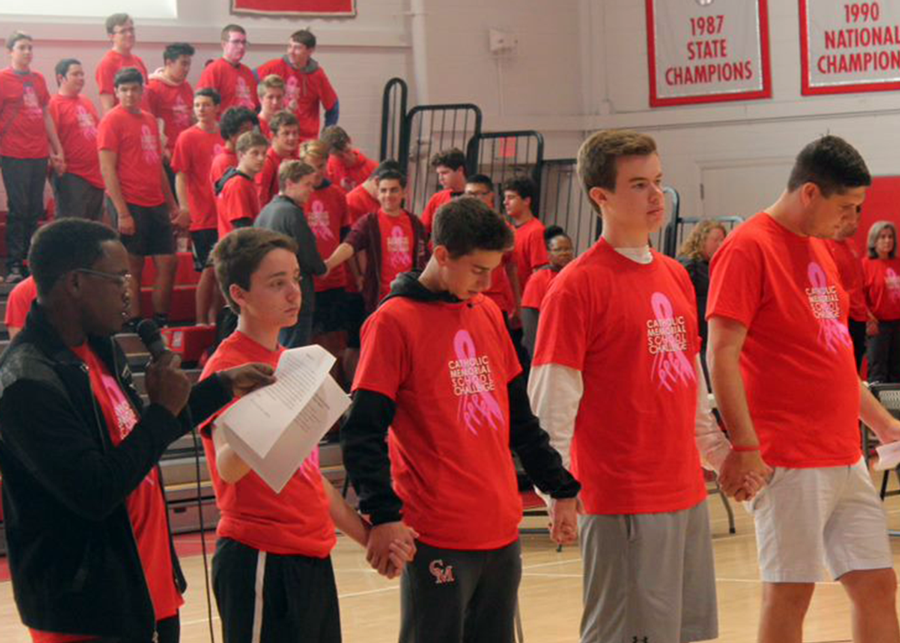 “Sea of Red” Raises Over $11,000 for Making Strides Against Breast Cancer Walk

9/30/2019
Sophomore Ethan Gallery led over 300 of his classmates to the Boston Esplanade where they walked in solidarity for those afflicted by breast cancer.
West Roxbury, Mass— Over 300 students from Catholic Memorial School arrived at CM hours before the start of the Making Strides Against Breast Cancer Walk on Sunday morning. After raising over $11,000 for the American Cancer Society over the past year, every student donned identical red shirts, each one etched with the school’s motto “Vince in Bono Mallum” on the back.

The gesture appeared simple.
But not to Ethan Gallery, whose mother fights stage-four breast cancer. To him, it stood for solidarity. It stood for no longer feeling alone. Standing before the crowd dubbed "The Red Sea" in the Ronald S. Perry Gymnasium, Ethan explained why.
“Please remember that today is much bigger than us,” said Ethan, a sophomore from Canton.
“We’re marching for those suffering from a disease and those who have been able to survive it.”

In a personal reflection, Ethan told the crowd that, four of the five days of the week, his mom drives into work. On Mondays, however, she drives to the Dana-Farber Cancer Institute where she undergoes her regular chemotherapy treatments.
“It takes a toll on her, but she fights through it,” Ethan said to his classmates.
He said that he admires her courage and strength. To Ethan, she lives as a hero.
So, seeing his classmates in the gym at 7 AM ready to walk in honor of those who battle the same disease as his mom, Ethan expressed his gratitude. At over $11,000, he and his classmates had just raised double the amount they had for last year's walk. Now, they knew the impact it made on the life of Ethan.
“I know that if it weren’t for the research and the donations made, she wouldn’t be here today,” he said.
With Ethan's words in their hearts, the CM students who form “The Red Sea” left the prayer service ready to board the three yellow buses outside the school and embark on the hour-long walk along the Boston Esplanade.
Upon their arrival, the group mingled with 25,000 other walkers from various Greater Boston organizations who gathered near the Hatch Shell.
Uniting into a single line, the CM students rallied around each other. Some stopped every now-and-then for a photo. Others lost themselves in a conversation with a new friend. It seemed impossible not to with such a warm community of neighboring organizations gathered together for a noble cause. They exchanged stories, sharing with one another why they gathered on the Esplanade that day.
“Most of us might not know someone who is fighting breast cancer but we’re all still human,” said CM Campus Minister Mr. Tabi Arrey.
“So, in the CM way, we are going out today and proclaiming to those afflicted by disease that, ‘I am with you, I will support you, I will walk with you, and that I will be your friend.’”