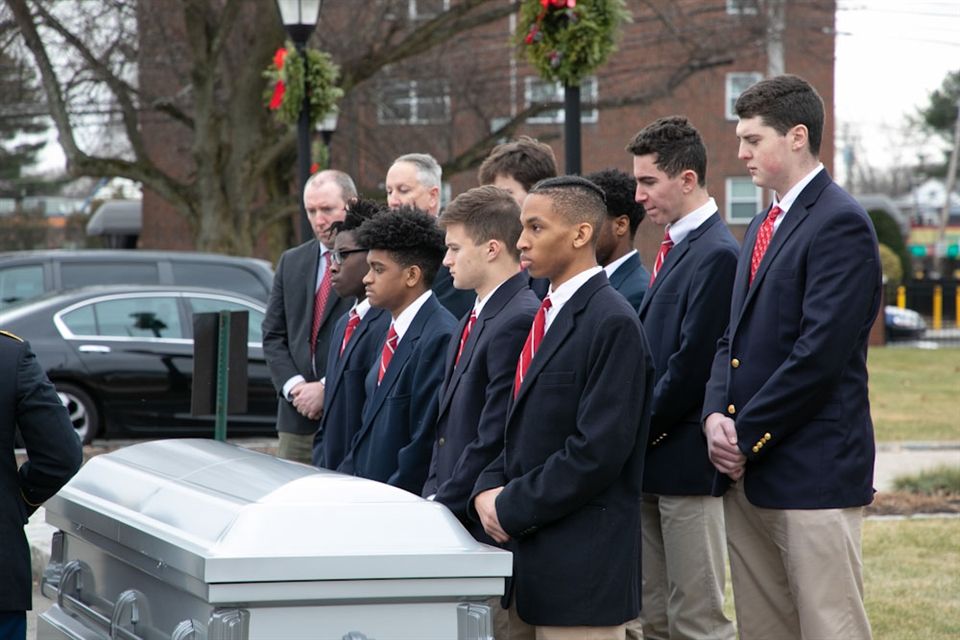 The Catholic high school that holds funerals for homeless veterans

5/27/2019
Michael Kotsopoulos
Catholic Memorial School students have taken up a new tradition in the past couple years to honor homeless veterans with funerals on campus.
This piece originally appeared in America Magazine on May 26, 2019.

I am greeted by a wooden casket hoisted on the shoulders of eight high school basketball players as I enter the lobby of Catholic Memorial School in early January. An American flag covers the casket. At 8 a.m., I expect a tired expression across the face of each young man and wonder how they will navigate the halls to the narrow chapel.

But, stoic and calm, the boys looked at ease. They walked tall, proud and sure-footed. Their composure surprised me as they made their way into the school chapel. Following the procession, I scanned the room to find an open seat. But the school’s theology classes packed every pew.

I stood in the back-left corner next to the tabernacle and watched the scene unfold. The mood felt different from most funerals. Every person in the room, faculty member and student alike, seemed to know their surroundings. If anything, it gave the school’s fifth funeral service for a homeless military veteran more of a welcoming mood than that of a somber “goodbye.”

A little unsettled, I kept thinking back to my first day of work at Catholic Memorial School. I remembered Vice Principal Tom Ryan giving the school’s new faculty a sound piece of advice: “If you want to let a student know that they’re loved, call them by their name,” he said to us. “After all, someone loved them enough to give them one.”

When a person calls someone by their name, it shows the person that they matter—that they exist in the eyes of at least one other person. But what happens when nobody knows their name? And what happens when those who knew it no longer exist? Who reminds them of their own dignity then?

The questions began to flood my mind in the middle of Father Peter Stamm’s opening prayer. At the sound of the deceased’s name, U.S. Army Veteran Timothy Fowl, I remember thinking, “Who?”

Nobody knew Mr. Fowl at Catholic Memorial School. Few people outside of the school’s all-boys West Roxbury, Mass., campus did either.
In the days leading up to the New Year, a homeless Army veteran named Timothy Fowl passed away at the Brockton VA Hospital—miles away from the Grove Street shelter in Worcester where records show he used to reside.

He deserved better, really. The man sacrificed six years of his life to serve his nation as a medical specialist in the 1980s. He worked as a welder in the years that followed before falling on hard times. Years later his trail went cold.

At the time of his death, Mr. Fowl left behind no known friends or family. He received no heartfelt goodbyes. Still, Mr. Fowl’s remains, given to Lawler and Crosby Funeral Home, needed a proper burial.
Kevin Durazo, the director of campus ministry, began the tradition of providing funerals for veterans with no known living friends or family two years ago when the C.M. hockey team laid to rest veteran John Fitzmaurice.

The school considers it a part of its mission to welcome those on the margins into their community—an active and engaging way for an adolescent to understand the concept of empathy. At C.M., serving means to walk with, not ahead of, another. Though students collectively complete over 15,000 hours of required service work each year, they do not receive hours for their participation in the funeral.

Whenever Mr. Durazo receives a phone call from Lawler and Crosby, he invites a different student group to host the service. At past funerals, the hockey and football teams volunteered to service as pallbearers. The school partners with Lawler and Crosby to coordinate the casket, hearse and transportation needed for the burial at the veterans’ cemetery in Winchendon.

This time, Mr. Durazo asked eight members of the basketball team to collectively serve at the funeral for Mr. Fowl, a man who gave up a part of his life to serve others.
Back in the chapel, I stood still and listened to our school president, Peter Folan, end the service with a eulogy.

“Here at C.M., we’re a family,” he said. “A proud family. We’re a community that welcomes people in and accepts them for where they are. We ask them to join us on our journey toward being more, doing more and caring for others.

“Timothy Fowl, welcome to our family.”

I thought back to Mr. Ryan’s mantra. At the time of his death, few knew Mr. Fowl. But as Mr. Folan listed off his military service and the significance of his duty, a room full of young men began to understand what the name Timothy Fowl meant. To them, it meant sacrifice for one’s country. It meant service. It meant bravery. With that, every student left school that day keeping Mr. Fowl’s memory alive.


After a final blessing, the basketball team resumed its duties. In front of the altar, they hoisted the casket and escorted Mr. Fowl back to his hearse. An honor guard presented Mr. Fowl with full military rights before loading him into the vehicle. Then, with the flag at half-mast, the boys said their goodbyes to their new brother to the playing of taps.

Looking back on the day, it strikes me how this service leaves such a profound impression on the minds of our boys. As a Christian Brothers school, C.M. prioritizes Jesus’ seven corporal works of mercy in its active service to others. These works instruct us to feed the hungry, give drink to the thirsty, shelter the homeless, visit the sick, visit prisoners, give alms to the poor and bury the dead. Each originates from Matthew 25, the Gospel chapter where Jesus tells his disciples to look for him in the least of their brothers.

The order’s founder, Blessed Edmund Rice, dedicated his life to providing a value-centered education for marginalized boys. He hoped that, with this education, they grew up into men of character who passed on their gifts for the betterment of the world.

During these funeral services in the chapel, our students learn what it means to welcome someone on the margins into their family. They give shelter, visit the sick and bury the dead. They learn how to empathize with the suffering of others and to see a stranger as their brother.
And it starts with learning his name.