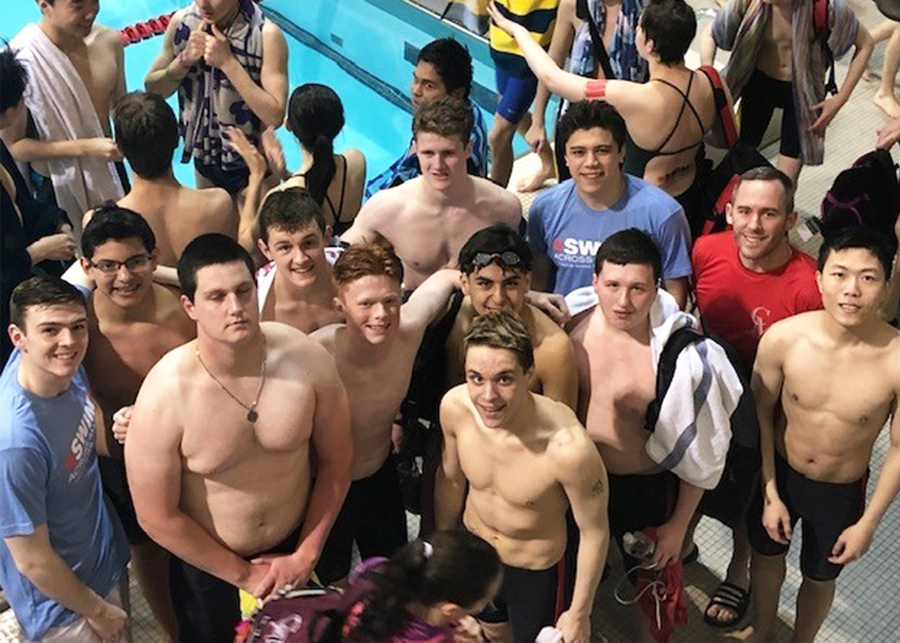 Swim Team Raises over $6,200 for Local Hospitals at Swim Across America Relay

A total of 13 CM swimmers returned to the pool to participate in the event, two months after their winter season ended. Together, they raised the fourth highest dollar sum of any team at the relay, earning CM a spot on the Swim Across America Team Honor Roll.
“It is rewarding to see our boys come together with such joy as they raise money and awareness, and our school should be proud to be represented by such thoughtful young men at this competition,” said CM varsity swimming head coach Mr. Patrick Murray.
The relay challenge lasts two hours and welcomes swim teams of college and high school student-athletes from across New England. Every year, swimmers compete to see which team can swim the furthest over the two-hour span. During that span, donations pour in from spectators and team sponsors.
Each participating team commits to raising a minimum of $3,000 according to the Swim Across America website. For every $100 raised over the $3,000 minimum, Swim Across America awards a bonus of 100 yards to the team’s total distance.
CM finished the event with a total distance swam of 6,000 yards.
Mr. Michael Dermody, an assistant coach on the team, proposed that the team participate in the event when he first joined the coaching staff five years ago. The CM swim team has participated in the event every year since.
“The boys have truly lived out the values of what it means to be a CM Knight,” said Mr. Dermody.
"Swim Across America has become a staple of the Catholic Memorial swim team and it truly embodies what it means to be a CM Knight.”
The CM swim team’s annual participation in Swim Across America serves as a testament to CM’s service-oriented culture according to Mr. Dermody. Next year, the team plans to continue their annual tradition with a return to the relay.