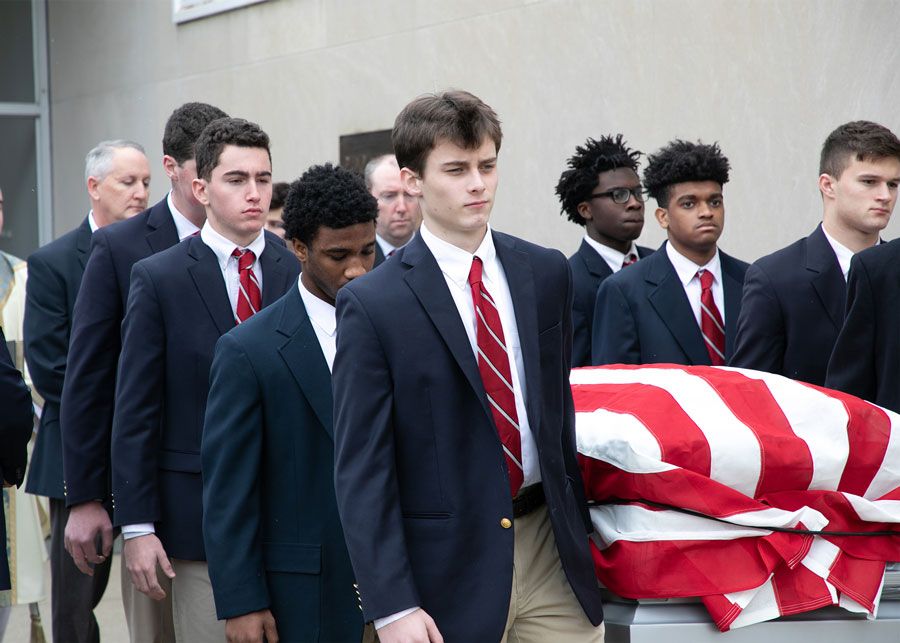 1/11/2019
On Thursday morning, eight members of the CM basketball team hosted the funeral of homeless U.S. Army veteran Timothy Fowl in the school chapel. The boys, alongside head coach Denis Tobin, served as pallbearers and led the service's procession.
West Roxbury, Mass.-- U.S. Army veteran Timothy Fowl offered his life to serve his country. When he passed away last week without a home and any known living friends or family, eight members of the undefeated Catholic Memorial School basketball accepted the invitation to host Mr. Fowl's funeral as pallbearers in the CM chapel on Thursday morning.

Together, they honored Mr. Fowl (born 1961), a Medical Specialist in the U.S. Army from 1983 to 1986, and his courageous acts of service with that of their own.
"CM has taught me the difference between right and wrong," said Brendan, a Peer Minister and captain of the basketball team.
"I think it’s important that we choose right over wrong one hundred percent of the time. What we did today is a witness to that. I think being with my brothers and commemorating the life of a soldier as we did here today has only strengthened that bond between all of us. I hope that kids can learn from our team’s bond, personally, and the bond of this special community on campus.”

Alongside Coach Denis Tobin, the eight student-athletes wheeled Mr. Fowl's casket into the school’s chapel after Lawler and Crosby Funeral Home delivered the casket to the West Roxbury campus by hearse.
As pallbearers, the basketball team carries on CM’s mission of solidarity with those on the margins. Mr. Kevin Durazo, the Director of Campus Ministry, asked the eight basketball players to take on this service initiative on Monday afternoon. All eight agreed to volunteer without any hesitation, according to Mr. Durazo.
Father Peter Stamm of St. Joseph Parish in Needham celebrated the funeral Mass. He offered a homily and eulogy for Mr. Fowl. Three separate CM classes also attended the funeral to pay their respects.
At the conclusion of the funeral Mass, all eight student-athletes led the casket’s procession out of the chapel. Together, they carried the casket through the lobby and outside to the hearse. Before loading the casket into the hearse, the boys presented the casket to an Army Honor guard.

Standing in front of a half-mast American flag, the honor guard presented Mr. Fowl and his casket with full military honors. This included a customary playing of Taps, a presentation of the American flag to Head Coach Denis Tobin, and a final salute.
"Here at CM, we're a family," said school President, Dr. Peter Folan at the conclusion of the Mass.
﻿
"A proud family. We're a community that welcomes people in and accepts them for where they are. We ask them to join us on our journey toward being more, doing more, and caring for others."
In November of 2017, CM began hosting funerals for homeless veterans when the school laid to rest Army veteran John T. Fitzmaurice, who also died with no living friends or family. Most recently, the CM football team laid to rest Air Force veteran Markham Lyons before a Sectional playoff game this past November.
This marks CM’s fifth funeral service for veterans over the past year and a half.
Through CM’s Campus Ministry program, students complete over 15,000 service hours in the greater-Boston area each year at organizations such as homeless shelters, food pantries, and the neighboring West Roxbury Veteran's Affairs Hospital. As a part of its ministry, CM aims to host one funeral service for homeless veterans during each quarter of the academic school year.
CM partners with Lawler and Crosby Funeral Home for the planning purposes of each veteran funeral. The service coordinates the casket, hearse, and transportation needed for the burial.