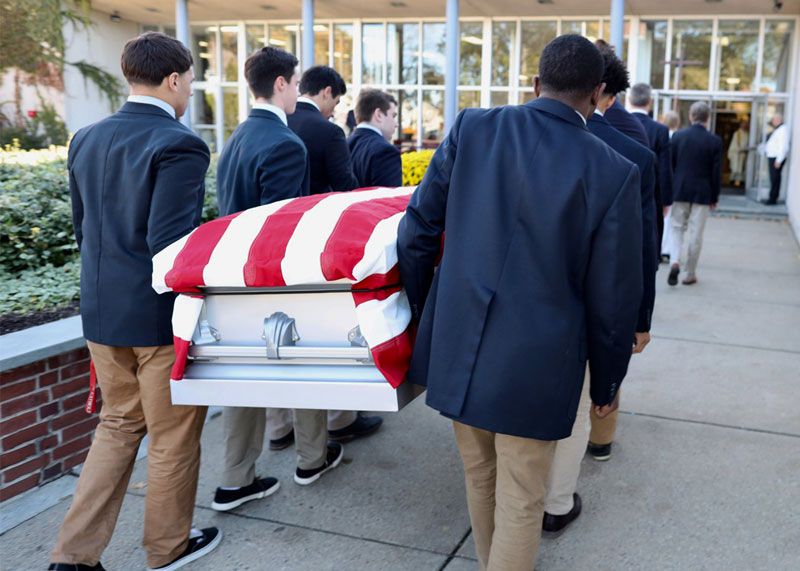 11/1/2018
CM continued their comittment to \veterans when the school hosted the funeral of Markham Lyons (1946-2018) on Tuesday morning-- CM's fourth funeral for a homeless veteran over the past year.
West Roxbury, Mass.— Air Force veteran Markham Lyons passed away without a single living friend or family member left behind. So, when Barrett Pratt and seven of his Catholic Memorial School football teammates carried his casket into their school’s chapel on Tuesday morning, they offered Mr. Lyons one final gift.

“Being part of this funeral really hits home to me,” said Barrett, the team's junior quarterback.

“Being a quarterback, you must be a leader on and off the field. People follow your lead, and hopefully people can take this example and bring this into their daily lives.”

As pallbearers, the football team carried on CM’s mission of solidarity with those on the margins. Last November, CM began hosting funerals for homeless veterans when the school laid to rest Army veteran John T. Fitzmaurice who died in the streets with no living friends or family.

“Think about the sacrifice that so many people make in everyday life,” said CM President Dr. Peter Folan at the service.

“Heroes walk among us. It is important that we recognize that there are everyday heroes who work among us, who walk in the street. Today is a day that we honor all of those heroes.”

Mr. Kevin Durazo, the Director of Campus Ministry, sees these funerals as a component of the CM Service program. Through the CM Service program, students complete over 15,000 service hours in the greater-Boston area each year. They serve at organizations such as homeless shelters, food pantries, and the neighboring West Roxbury Veteran’s Affairs Hospital. Ideally, Mr. Durazo hopes to host one veteran funeral at the school's chapel every academic quarter.

CM partners with Lawler and Crosby Funeral Home for the planning purposes of each veteran’s funeral. They provide the casket, hearse, and transportation needed for the burial. The funeral home buried Mr. Lyons at the Massachusetts National Cemetery in Bourne, Mass.

“Sometimes being there with someone who has no one else to be with can be more meaningful than you may think,” said Hunter Tully, reflecting on the service.

“The celebration of Mr. Lyons’ life inspired me to be more present and impactful in the lives of others. This amazing act of service just goes to show what type of community Catholic Memorial is.”