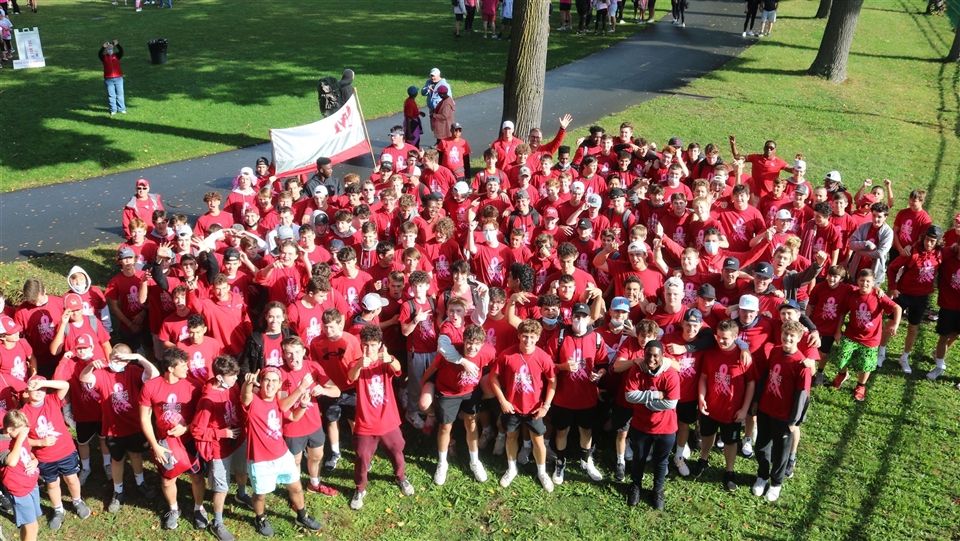 9/27/2021
This year’s group raised $8,000 for the American Cancer Society’s support services and research.
Boston, Mass. — A Sea of Red could be seen from Boston Common to the Esplanade Sunday morning as more than 200 Catholic Memorial students took part in the American Cancer Society's Making Strides Against Breast Cancer Walk. This year’s group represented the 20th such effort from CM to take part in what has become one of the most significant charity events for the school.
“I think it gives great hope, I think it teaches our boys about survivorship, and advocacy,” Catholic Memorial President, Dr. Peter Folan said in a post-walk interview with WHDH.

A school tradition, the walk has a larger meaning for students like senior Tom Crean, whose mother fought breast cancer when he was in eighth grade.
“Gathering as a community is what gives hope to all of those who are struggling. In our Sea of Red today, there are those who stand here in similar situations to what mine was. We walk for each other, and we walk for the many families outside the CM community facing the same battle. Today is about something much larger than ourselves,” Crean told his classmates prepared to walk along the Charles River.
Since 2001, CM’s participation in the walk has grown from a single bus of students to hundreds of participants across two decades and over $250,000 raised for breast cancer research. In 2020, the American Cancer Society named the school a “National Leader” in the fight against breast cancer. This year’s group raised about $8,000 for the American Cancer Society’s support services and research.
The event was organized by Mr. Michael Dermody and the Office of Campus Ministry.