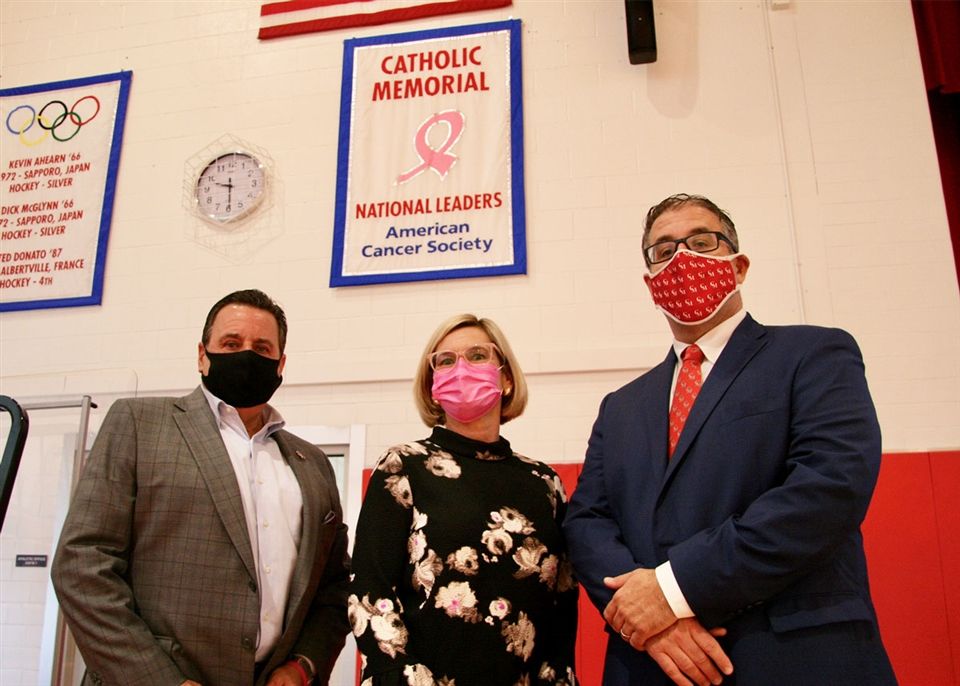 11/4/2020
After 15 years and over $250,000 raised, CM continues to make strides against breast cancer in 2020.
West Roxbury, Mass.— In a normal year, over 400 CM students would have boarded four yellow buses to the October Making Strides Against Breast Cancer Walk. In a normal year, a sea of red T-shirts would have announced the students’ arrival at the Boston Esplanade Hatch Shell.

This is not normal a year, however. The American Cancer Society (ACS) cancelled its annual in-person October walk this summer due to the global pandemic.

But CM kept making strides and, on October 28, CM students, faculty and staff gathered on campus to host its second Making Strides Against Breast Cancer Walk of the month. Alumni joined, too, watching in awe as representatives from the American Cancer Society formally named CM "National Leaders" in its fight against breast cancer.

The school had raised over a quarter-million dollars for the ACS over the past 15 years and, despite the global pandemic, had managed to raise another $10,000 in October alone.

“CM’s leaders and students showed everyone that it was never really about the walk,” Louise Santosuosso, Executive Director of the ACS, said.

“The school community has demonstrated we can’t and won’t allow progress to be put on hold because of COVID-19. Because of Catholic Memorial’s support, the American Cancer Society is able to fund more and better treatments and discoveries that will improve and save lives.”

Students, faculty, and alumni stood six feet apart, kept masks over their faces, and erupted in applause as the banner unfurled. Mr. Ken Martin ’77, an ACS board member in attendance, said the moment put him in awe of CM’s massive accomplishment.

View this post on Instagram
Over the last 15 years, CM is proud to have raised a quarter-million dollars for @makingstrideswalk. Thank you to @americancancersociety for naming us as National Leaders in the fight!
A post shared by Catholic Memorial School (@catholic_memorial) on Oct 28, 2020 at 1:33pm PDT

“As the Breast Cancer banner was revealed, I had never felt prouder of my fellow Knights,” Mr. Martin said.

“This is truly an achievement earned by all and so deserving. Our motto, ‘Overcome evil with good’ is practiced every day, here – bravo men.”

The program continued with stirring testimonies from alumni, faculty, and staff, all of whom called on the CM community to continue fundraising for breast cancer research.

Mr. John Burke ’66, whose wife is a 20-year cancer survivor, recalled the immense pride he felt in seeing his alma mater appear at the Making Strides Walk for the first time. Inspired by the fundraising numbers set by CM, he ended his testimony announcing that he too would make a $10,000 donation to the Breast Cancer Research Foundation.

“Even now, in the midst of COVID, CM President Dr. Peter Folan has still found a way for the boys to support breast cancer awareness and walk around campus despite the rain,” Mr. Burke said.

“I am so impressed by the caring spirit and kindness that I felt so many years ago when I was a student, and that is so alive and flourishing at Catholic Memorial.”

Following the testimonies, members of the faculty and staff, including Principal Mr. Andrew O’Brien, rallied more donations by publicly shaving their heads and faces. Students then exited the gymnasium to begin their walk. Together, they walked through a tunnel of pink balloons and entered O’Connor Stadium, where pink ribbons inscribed with personal thoughts and prayers lined the walk route.

Students danced to music from the stadium’s loudspeakers, making their way through the race course while remaining socially distant.

Mr. Michael Dermody ’07, CM’s Director of Campus Ministry, beamed with pride as he watched the scene unfold from afar.

He pointed to the new banner in the gymnasium as a testament to the school’s spirit of servant leadership.

“We are so proud to call ourselves national leaders in the fight against breast cancer,” Mr. Dermody said.

“This is all thanks to our school's commitment to service, which makes days like today so successful and fun. Without that commitment, there isn’t a banner with a pink ribbon hanging in the Perry Gymnasium.”