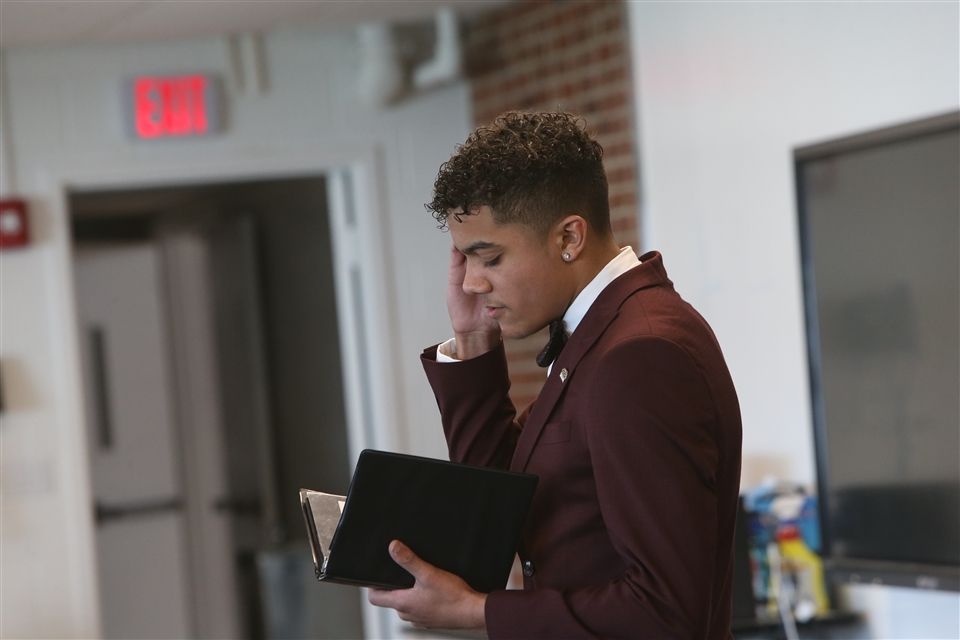 On Sunday, the Speech and Debate Team won the Massachusetts Speech and Debate League (MSDL) state championship — its third speech and debate state championship in four years — during the MSDL’s first-ever virtual competition.
The team recorded a narrow four-point margin over reigning state champion Shrewsbury High School, claiming first place by a score of 260-256.
“It took considerable courage for our speakers to commit themselves to a live format ‘e-contest,’ the first in the nation,” said Br. Anthony Cavet, the team’s head coach.
“But they realized that it is in moments of uncertainty that we really know what we are capable of.  So, accustomed as they are to punching above their height and weight, they straightened their ties, clicked on their computers and did what they do best."
At the beginning of May, the MSDL announced that they would move its state championship from the first week of April to a virtual event on Memorial Day weekend amid the COVID-19 pandemic.
Despite the unconventional setup to the competition, four CM students earned individual state championships in their respective categories. Two students, senior Marcus Gadsden and junior Ben Kimball, won multiple championships in different categories.
Marcus earned first place in both Dramatic Interpretation and Declamation while Ben earned first place in Children’s Literature and in Duo Interpretation. Ben won the Duo Interpretation category alongside fellow junior Luke Esposito and also finished second in Dramatic Interpretation, behind Darius.
Nick Olwell, a junior, earned first place in Programmed Oral Interpretation while junior Nolan O’Connell earned second place in Radio Broadcasting.
According to Nick, virtual performances required some adjusting to early on in the competition.
“I try to make my pieces humorous and I’m usually moving around a lot and engaging with the audience,” said Nick, an assistant captain.
“So not having an in-person audience and not being able to move around as much definitely made it more difficult.”
Nick said he improvised by looking directly into the camera to create eye contact with the audience, rather than staring at the screen.
“It was a lot of seeing what works and doesn’t work, which can be nerve racking, especially at the state level,” he said.
The strong performance from the team proved a testament to every team member’s commitment, according to Nick. Despite their inability to hold in-person practices, team members still practiced their pieces on their own at home or with one another over Zoom and Microsoft Teams.
“It shows that, even while not being there in person, we’re still a community,” said Nick.

“We still practice with each other and lift each other up. At home, it’s a lot more of your responsibility. To see the team succeed is impressive because it shows that everybody was preparing during the pandemic.”
Last year, the team placed second in the state, behind Shrewsbury. Having won back-to-back state titles in 2017 and 2018, the second-place finish provided plenty of motivation for the team to bounce back and reclaim the state title this year.
In September, the team made a statement when it recorded its second consecutive top-10 finish at the national Yale Invitational tournament. The team continued to build momentum throughout the fall with impressive performances at tournaments at Revere and Lincoln-Sudbury.
Then, in December, success culminated in the team’s best performance in school history at the 59th Annual Holy Festival at Natick High School. Twenty-five CM students won awards and three finished in first place at the competition.
Stellar performances from underclassmen emerged as a constant theme throughout the season. In February, freshman Will Cummings and sophomore Julian qualified for the NSDA national tournament. Their success represents a strong sense of optimism for the program beyond 2020.
“Seeing the younger members of the team succeed shows the program has a bright future,” said Nick.
“This [championship] goes to show that the team is still on the rise.”