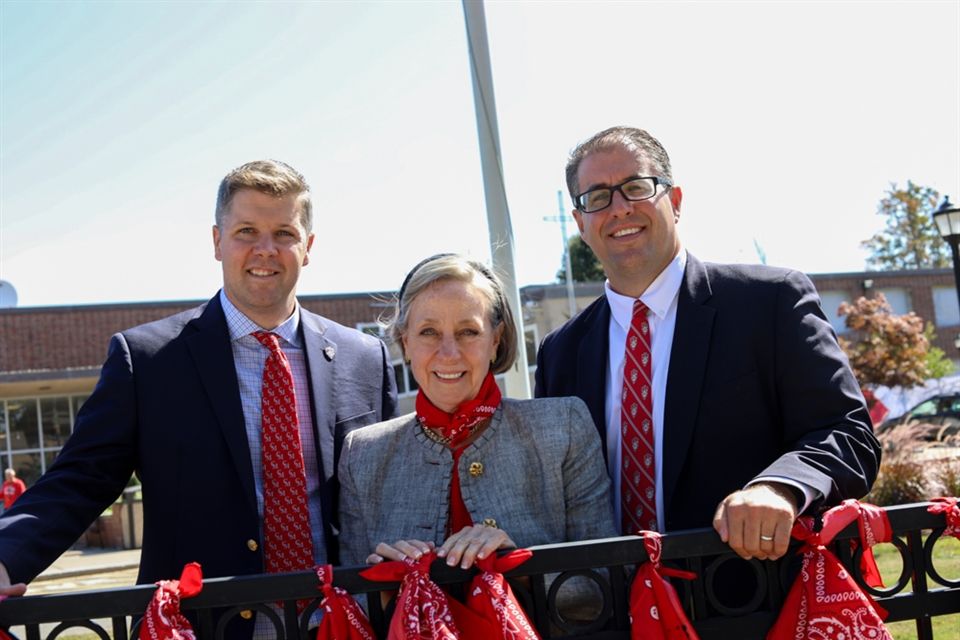 9/13/2019
Michael Kotsopoulos
The mother of Welles Crowther, “The Man in the Red Bandanna,” joined the CM community to honor its own first-responders and alumni who died on 9/11.
West Roxbury, Mass.-- Mrs. Alison Crowther, the mother of “The Man in the Red Bandanna,” arrived at Catholic Memorial School’s campus on Friday morning to the sight of hundreds of red bandannas tied to the school’s black-iron fence along Baker Street.

Waving in the breeze, each bandanna told its own story of character. Before Mrs. Crowther’s arrival, groups of students had written the names of their own personal heroes on the cloth. Together, they tied them on the fence. The names, etched in sharpie, caught Mrs. Crowther’s attention.

Taken aback by the tribute to her late son, Welles, she paused to acknowledge each name before entering the Ronald S. Perry Gymnasium where she planned to address the school’s student body that morning.

Greeting her with a smile, CM President Dr. Peter Folan walked her inside.

A few months ago, he invited her to launch the school’s “Character Matters” inter-disciplinary initiative with a school-wide discussion on character. Dr. Folan piqued her interest when he mentioned CM’s all-school read of Tom Rinaldi’s book The Man in the Red Bandanna, which chronicled the heroic actions of her son, Welles, on 9/11.

At the time, Dr. Folan explained that the book motivated him and the entire CM Leadership Team to launch the initiative as a way to honor its own first responder community and honor the lives of two alumni who died on 9/11, Mr. Mark Bavis ’88 and Mr. John Cahill ’62, during the school’s Friday Night Lights: A Salute to First Responders football game against Saint John’s Shrewsbury.

Hearing this, she knew that she needed to join the school’s initiative. More importantly, she knew her son would have wanted her to.

“This is the most important thing that I can be doing right now with Welles’ story,” she said to the crowd.

“He was a lot like you all. Full of life, full of energy.”

In a gymnasium, Mrs. Crowther began her talk with a reflection on the life of her son. She explained how he fulfilled his lifelong dream of serving as a firefighter when he sacrificed his life rescuing at least 10 people from the World Trade Center’s South Tower on 9/11.

“Just like my son, each of you is called to greatness,” she said.

“That’s why you’re all here. I want you all to reflect on the heroes in your life who remind you that character matters.”

Mrs. Crowther explained that her son’s story teaches us how to act as leaders, play a role on a team, trust one’s own ability to make a difference, and seize the day. Together, these traits embody a solid character, she believes.

“Welles always talked about how much he loved being on a team,” she said, remembering one fond moment between her and her son in the weeks leading up to 9/11.

“He told me, ‘I love being on a team because, when you’re on a team, all the differences that we have fall away. We all come together, become a family, and try and accomplish the same goal.”

Before answering questions from students, she left her audience with a simple, but profound, challenge.

“Embrace the opportunity you have before you today,” she said.

“Welles would be saying the same thing. Think of him as an older brother. You’ve gotten to know him [from your all-school read]. Let him talk to you. Seek council from his story.”

Through its “Character Matters,” campaign, the CM Leadership team plans to incorporate lesson plans on character into the classroom, using Welles’ story as an example. Over the course of this school year, the school intends on engaging its students in larger conversations about character and leadership throughout its curriculum.

“Character matters here at CM. We are a school that understands how the conversations in the classrooms, hallways, stage, and athletic fields fundamentally impact our students,” said Dr. Folan.

“Hosting Alison Crowther and honoring our first responders are important milestones that help our students reflect upon their priorities and values. This program exemplifies how we engage and inspire our students.”


According to Dr. Folan, CM believes that its students must learn about the history of 9/11, the courage demonstrated that day, and the weeks that followed. He believes that the actions of all NYC first responders that day embody the school’s belief that “character matters.”

“It’s a mission that we strive to live by on Baker Street every day,” he said.

“What happened on 9/11 changed my own life forever. The days and weeks that followed demonstrated the true spirit of this country. It’s my pleasure to welcome Alison into our school community. The story of her son and his impeccable character is how I want CM’s students to model their lives not just today, or tomorrow, but for the rest of their lives.”
Leaving campus today, Mrs. Crowther took one final look at the black-iron fence in front of the school. She noticed a few more students making their way to the black-iron fence, red bandanna in hand. There, they sat on the pavement and spelled out the names of their parents, teachers, firefighters and countless others who emulate Welles’ memory—that of a hero.

“I noticed the red bandannas tied in front of the school the moment I stepped on campus,” said Mrs. Crowther.

“That piece of cloth carries such a powerful message. When I see people tie it on trees, front doors, I see it as a really beautiful thing.”