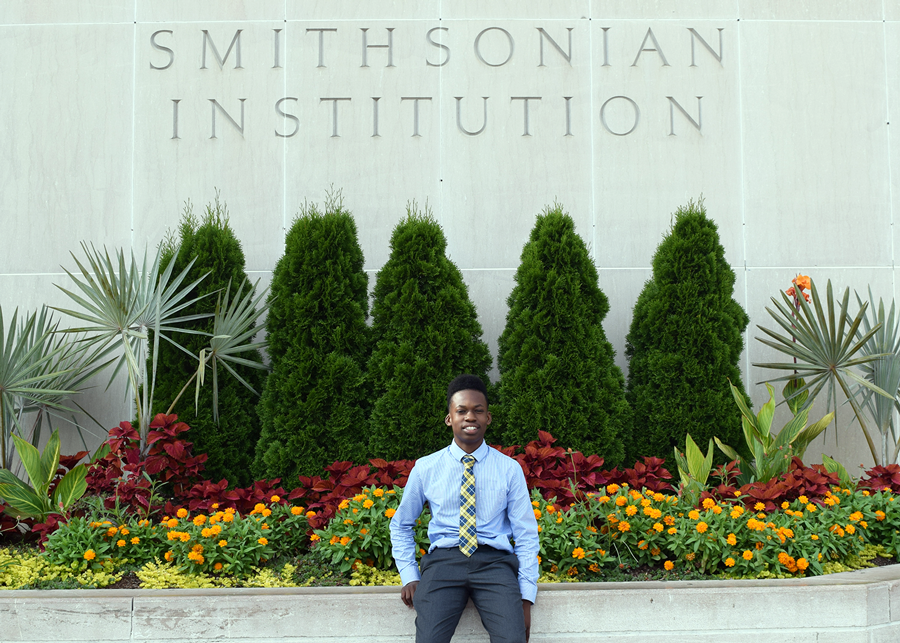 7/10/2019
The rising freshman from Dedham earned the honor after serving as the lone representative from Massachusetts at the NHD national contest last month.
Washington D.C.— When CM 8th grader Logan Roberts put his National History Day (NHD) project on the Harlem Hellfighters on display in the Smithsonian National Museum of American History last month, he noticed one spectator lingering behind the crowds to take a few extra photos of his display.

Curious, Logan asked the spectator, “Why, mine?”

The spectator’s response surprised him.

“He told me that his great uncle, Norman Lawson, was a member of the Hellfighters,” said Logan, a resident of Dedham.

“He was proud that someone decided to cover the Hellfighters and give them the coverage that they deserved.”

Logan, who served as the NHD representative from Massachusetts at the NHD national contest last month, chose the Harlem Hellfighters —an African-American infantry from WWI whose members returned home to racist treatment— in honor of the 2019 NHD theme “Triumph and Tragedy."

“The triumph was that they fought so well and fought more than any other American infantry unit during WWI,” said Logan.

“But, the tragedy was how bad Americans treated them when they returned home. They didn’t receive equal rights after fighting for their country.”

Logan’s project began this spring. His 8th grade social studies teacher, Mrs. Barbara Flynn, assigned Logan and his classmates the task of completing their own NHD projects, which they would later submit to the Massachusetts History Day contest. To help her students think of project ideas, Mrs. Flynn provided her students with a list of historical names and brief descriptions that fit into the NHD’s “Triumph and Tragedy” theme.

Out of all the topics provided on Mrs. Flynn’s list, the name “Harlem Hellfighters” caught Logan’s attention.

“I had never heard of an all African-American infantry,” he said.

“So, I decided to look into it and it really amazed me.”

Logan’s display received immediate praise from Mrs. Flynn, who watched Logan advance through several rounds of competition before qualifying for the Greater Boston NHD Competition. His performance earned him a spot in the statewide contest where he finished in first place this past April.

“I’m so proud that Logan was able to represent not only CM but the state of Massachusetts,” said Mrs. Flynn.

“It has been an honor and privilege to teach Logan this year while witnessing his love of history and his great ability to share his knowledge.”

Logan’s first place finish qualified him for the NHD national contest at the University of Maryland where, despite not placing in the national contest, he earned the privilege of putting his Harlem Hellfighters project on display in the Smithsonian.

On the day of his scheduled Smithsonian Display, Logan arrived at the museum for 7 am. After setting up his poster boards, he spent the next 10 hours explaining the Harlem Hellfighters’ place in American history to crowds of spectators, including the grand-nephew of Norman Lawson. His parents and younger sister looked on in admiration.

“He clearly knew all the facts and details,” said Mrs. Roberts, Logan’s mother.

“To watch him present like that, it really put a smile on my face.”

“He was already well spoken, but it really gave him a heightened sense of confidence.”

Logan’s project excited his parents from the start. Both wanted Logan, who played for CM’s middle school and track teams, to explore the many opportunities that CM had to offer outside of athletics. When they heard about Logan’s opportunity to practice his speech and debate skills in front of a wide audience, they recognized it as a chance for growth.

“We wanted him to go to CM for these larger opportunities,” said Mrs. Roberts.

“He was coming from a smaller school. CM gave him the extracurricular clubs that he needed to explore and try new things to help him realize his talents.”

“A lot of kids don’t know what they’re good at until they go and try it,” added Mr. Roberts.

“I’ll never forget people coming up to me and telling me how mature my son was. I was just such a proud parent.”

Now, Logan believes that his newfound sense of confidence will empower him to explore opportunities that he never bothered to consider before.

“Now, I think trying new things will come easier to me,” said Logan.

“I’m excited to know that trying something new gave me a whole new life opportunity that led me to the Smithsonian.”