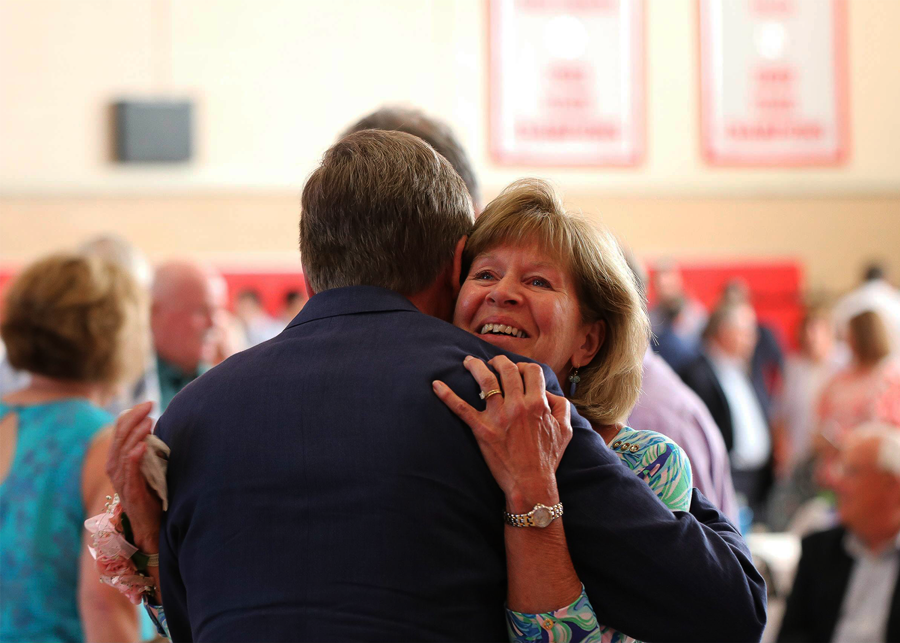 Taylor congratulated Mr. Beatty on his 45 years of service as a teacher, a coach, the Math Department Chair, and the first alumni-Principal in CM’s history. As a congratulatory gift, Taylor invited Mr. Beatty and his wife, Anne, to Taylor’s July 3rd concert in Tanglewood, Massachusetts.

“Congratulations to you, sir, on [almost] 50 years of service. What a thing. [I’m] in the same boat. Basically, 50 years in. And also—kudos—hats off for singing Carolina in My Mind on the way out. Good idea!”


Taylor’s message to the Ronald S. Perry Gymnasium—a room filled with colleagues, faculty, family, and friends there in support of Mr. Beatty— drew memories from the National Honors Society (NHS) induction ceremony this past March.

At the end of the March NHS ceremony, Mr. Beatty sang his own rendition of Taylor’s song Carolina in My Mind in front of parents, students, faculty, and administrators. He never sang in front of an audience before, Mr. Beatty said. But, when junior Rory Redmond, and Music Director Dr. Michael Monroe, approached him about the idea months before, he said it felt “right.”

After all, his colleague Mr. Vin Catano, a member of the CM English Department, introduced Mr. Beatty to Taylor’s music during his senior year of high school in 1968. Looking back on this memory, Mr. Beatty, who said that he collected dozens of James Taylor vinyl records and CDs while attending numerous concerts over the years, saw the opportunity as the perfect way to end his final NHS induction ceremony.

“When [James Taylor] finished [his message] by telling me it was a ‘good idea’ to end my career by singing [Carolina in My Mind], I don’t know how you top that,” said Mr. Beatty.

“I can’t remember a moment in my life when I was so completely overwhelmed with amazement at what was happening in the moment.”

In 1974, Mr. Beatty returned to his alma mater to join the school’s Math Department. For the next four decades, he taught more than 6,000 students and coached more than 4,000 student-athletes as the assistant coach for the cross country, indoor track and field, and outdoor track and field teams. While working full-time, Mr. Beatty managed to earn his Master of Education from Worcester Polytechnic Institute.

CM inducted Mr. Beatty into its Athletic Hall of Fame in 2014 and, in 2015, Dr. Peter Folan named Mr. Beatty the school’s first alumni-Principal. This past year, the school honored Mr. Beatty with its Vince In Bono Malum award. The award honors members of the CM community who best distinguish themselves as excellent ambassadors of the school.

“Over the past four years, he has given up his summer vacations on Cape Cod to serve this school so nobly and well as the Principal,” said Dr. Folan.

“It has been an honor to serve each day alongside Mr. Tom Beatty. The legacy of a great educator like him lasts forever. He is part of the greatest generation of Catholic educators who have assumed the mantel as lay leaders in Catholic schools. He and others like him have ensured the success of Catholic education in the City of Boston.”