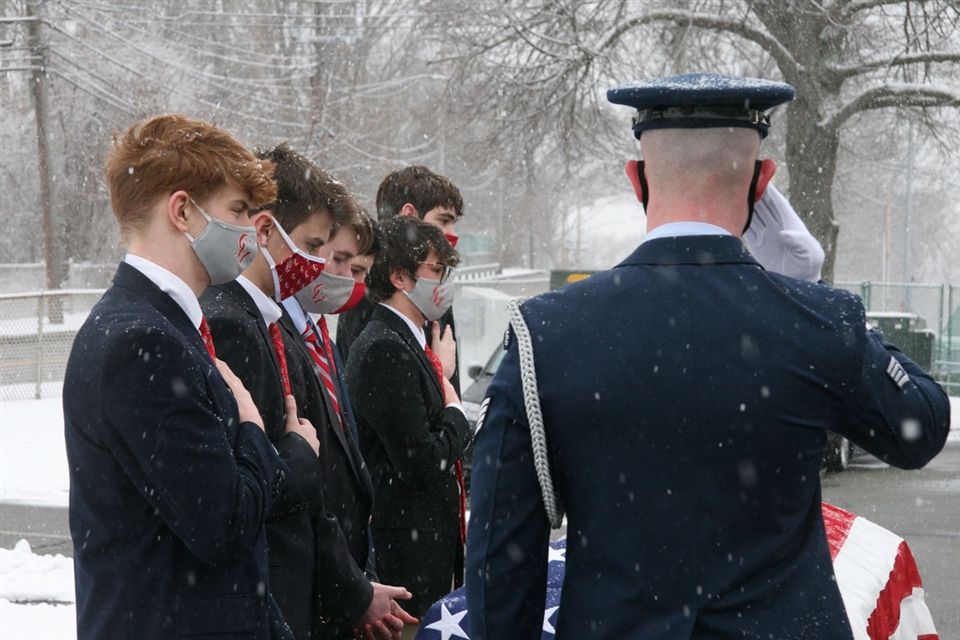 Six of Mrs. Rich’s nine students served as pallbearers amid flurries of snow in front of CM’s main entrance, a practice that Mrs. Rich said deepened her students’ understanding of the Catholic Church’s Corporal and Spiritual Works of Mercy. According to Loyola Press, the Corporal and Spiritual Works of Mercy list the 14 ways in which people should perform God’s compassion and mercy to those in need.

“One of the Corporal Works of Mercy is to bury the dead, which is a way of loving and recognizing the dignity of each human life,” said Mrs. Rich.

“CM’s tradition of hosting funeral service for those without family recognizes the inherent, God-given dignity of each person. It was powerful to see the boys serve as witnesses to this fact this morning."

On Wednesday, Fr. Wayne Belschner, the pastor at St. Mary of the Assumption in Dedham, celebrated Mr. Grew's funeral Mass. Mrs. Rich was amazed by the connection Fr. Belschner made between the funeral service and the creation stories in the Book of Genesis.

“Fr. Belschner reminded us that we’re created out of love, in the image of and likeness of God. One of the most important lessons my students took away from this experience was the need to treat each person with dignity.”

CM began hosting funerals for veterans in November of 2017 when the school laid to rest Army veteran John T. Fitzmaurice. CM partners with Lawler and Crosby Funeral Home for the planning purposes of each veteran funeral. The service coordinates the casket, hearse, and transportation needed for the burial. Every veteran funeral service concludes with an honorary presentation of the American flag to the deceased.

“We here at CM value the dignity of every human person,” Mr. Dermody said.

“That’s why we made it our mission to value the life of Mr. Grew today, just as we do with every veteran who we pay our respects to.”

As a collective school community, students at CM complete over 16,000 service hours in the greater-Boston area each year at organizations such as homeless shelters, food pantries, and the neighboring West Roxbury Veteran's Affairs Hospital.

Mr. Dermody says the funeral services encourage a variety of student groups to live out the program’s mission by standing in solidarity with those on the margins.

According to Mrs. Rich, the service educates more than just the mind; it educates the heart.

“I was so proud of the boys who accompanied Mr. Grew this morning at his funeral, as pallbearers, readers, and attendees,” added Mrs. Rich.

“They embodied the love and mercy that are so important to our identity as a Catholic Christian community in their reverence and care.”