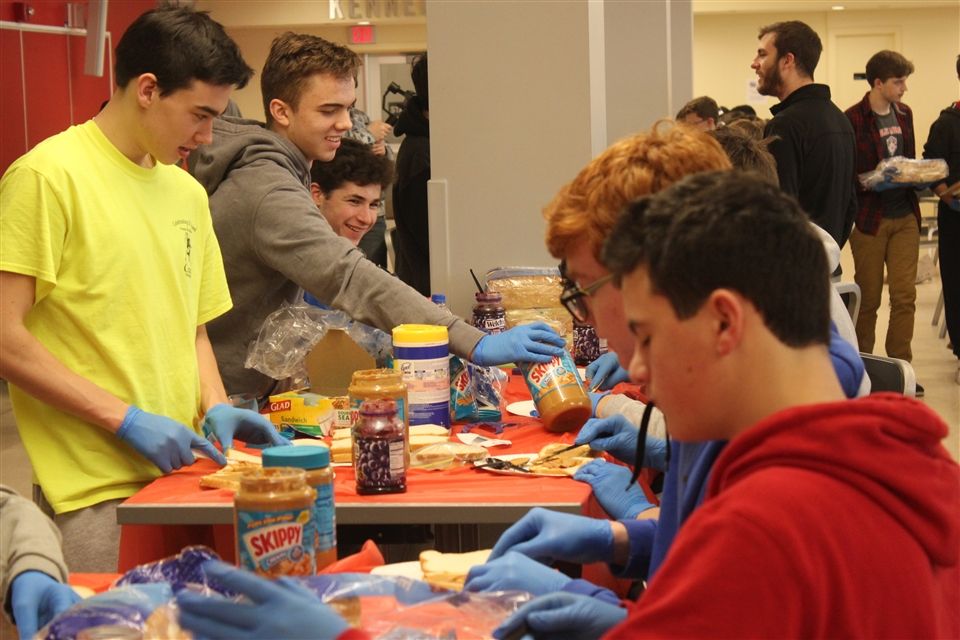 Known as CM’s annual Hunger Fest, the overnight service retreat advocated for local homelessness and hunger through an 18-hour, student-led fast from Thursday night into Friday morning.
“At CM, I learned the importance of service through experience,” said CM alumnus Mr. Will Padden, who prepared the retreat’s opening address on Thursday night.

“I was introduced to the idea of service through theology class, but never understood its power until I saw the impact of service first hand."
Mr. Padden co-founded CM’s Hunger Fest with fellow alumni Mr. Kevin Dugue and Mr. Kieran Tuomey in March of 2017. The three students brought the idea to Baker Street following their junior year ACTION retreat to Florida in 2016.
Every year, the ACTION retreat brings together student representatives from every Christian Brothers School across the country. The representatives exchange ideas on how to best introduce new advocacy projects within their school communities.
Each ACTION retreat focuses on a different theme. In 2016, the retreat emphasized themes of hunger and homelessness, inspiring Mr. Dugue, Mr. Tuomey, and Mr. Padden to take action back home at CM.
“You don’t understand the importance of serving the homeless until you have slept on the hard floor, until you have been hungry, until you have seen the way some people have to live in shelters,” added Mr. Padden.
Now in its third year, Hunger Fest continues to grow in popularity. The program needed a waiting list within the first few weeks of registration according to program coordinator Mr. Kevin Durazo.
Students receive six service hours for their time on the retreat, which occurs on a day with no scheduled classes. At CM, students must complete a required number of service hours before the end of their academic school year. However, students insisted that they signed up for the retreat for a much bigger reason.
“It’s not about the service hours here at Hunger Fest,” said junior Dean LeBron, who attended the 2018 ACTION retreat.
“This experience motivates all of us to be leaders. Seeing what I do and what CM does demonstrates love in action. And I’m grateful for that."
During their overnight fast, students engaged in community building activities and group discussions centered on hunger and homelessness. A mock hunger banquet illustrated the food gap between the world’s different income groups.
The night ended with a viewing of The Pursuit of Happyness in the school gymnasium. During the film, students rolled out sleeping bags and prepared for bed. While some took a head start over others, the students slept on the gym floor—an act of solidarity with Boston’s homeless.
The next day, students woke up early to prepare brown bag lunches in the school’s Kennedy Commons. Every brown bag contained either a bologna and cheese sandwich or a peanut butter and jelly sandwich along with a snack and drink. Students then left campus and delivered the lunches to Pine Street Inn, Boston Rescue Mission, St. Francis House, Bridge Over Troubled Waters, and Catholic Charities Boston.
Students arrived back on campus ready to decompress. They took time to reflect on their work during a closing prayer service and broke their fast with a pizza lunch afterwards.
One-by-one, they began to leave the Commons. Each brought home a full stomach. However, they also brought back a heavy heart. They knew that countless men and women in Boston would spend their Friday afternoon preparing for the same night of hunger and hard floors that they had experienced the night before.
At the end of the day, the students’ awareness towards this made all the difference for another successful Hunger Fest.